Expectations of higher inflation have increased steadily over the past few months as countries worldwide roll out coronavirus vaccinations and fiscal stimulus remains strong.

However, in our view, inflation expectations are starting to look overdone and short-term pressures will prove to be transitory. Ultimately, we anticipate inflation levels returning to recent historical norms (see chart below) later this year, and as such we believe investors should be cautious about buying into higher inflation expectations over the medium to longer term.

There are currently several drivers spurring on higher inflation expectations among investors. Alongside unprecedented central bank support, there is wide anticipation of a potential spending boom as lockdowns end. In addition, this year we have witnessed an abundance of supply chain disruptions and a rising oil price.

But this backdrop in many ways reflects the environment we lived through a decade ago. 2011 witnessed the Arab Spring, which led to a subsequent spike in oil prices[1]. That same year, there was the Fukushima nuclear disaster in Japan, that led to supply chain bottlenecks for several manufacturing sectors including car production.

Inflation breakevens – the difference between a nominal bond’s yield and that of an inflation-linked bond of the same maturity – rose significantly back then but peaked about five months before the peak in inflation itself.

The US Federal Reserve stepped in and introduced its second round of quantitative easing (QE) following the global financial crisis – known as Operation Twist. Many market participants believed this created the perfect storm for inflation to soar – but it didn’t and instead reverted to normal levels. 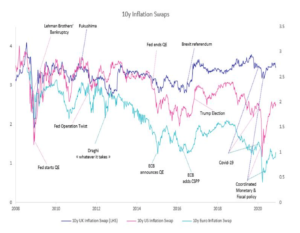 Recently we have seen supply chain disruptions because of the global semiconductor shortage. There has also been the brief but impactful stoppage in the Suez Canal and delays due to uncertainty over trade between the UK and European Union post-Brexit.

Coming o­­ff the back of their lows in 2020, oil prices in 2021 will also potentially drive a spike in inflation. But we believe we will see the same outcome – following the similar scenario in 2011 – namely that any pressures will be temporary.

I expect the inflation theme to be with us through the summer, and probably for longer in the Eurozone, but I believe that oil-related volatility will likely disappear within the coming six months and that the other pressures will also dissipate.

It is true that there is pent-up demand which, combined with excess savings, should fuel consumption as shoppers return to the high street, diners return to restaurants and families go on holiday. But it is too simplistic to assume that people who have been able to save money during lockdowns will immediately go out and spend – especially if prices are above their normal levels.

What’s more, it is how the annual inflation trend behaves over 10 years that really drives the market.

There continues to be a lot of spare capacity in the global economy and in the medium-term we see inflation returning to historical ranges of between 1% and 1.5% in the Eurozone and 2% to 2.5% in the US.

Our own survey of inflation forecasts in March found a consensus expectation for US Consumer Price Inflation to peak between 3% and 3.5% this summer, then decrease to 2% on average into 2022.

Europe is expected to reach peak inflation slightly later, in the third quarter; core inflation will likely be very volatile, hovering around 1% but potentially reaching 1.5% in September.

The Eurozone has relatively low inflation due to the low import costs from countries with lower production costs and the relative strength of the euro. However, the fact that globalisation has helped keep prices low is potentially at risk from policies that could be described as more protectionist.

A premium on future inflation

Further upside in inflation breakevens would mean that the market puts a premium on future inflation.

In my experience, short-term inflation developments have an outsized effect on long-term market-based inflation expectations. Inflation breakevens also tend to mean-revert to the average level of core inflation over the preceding few years.

For the past few years, the market for inflation breakevens traded at a discount to expectations, but what we have seen recently is the opposite, and investors are starting to pay what is essentially an inflation hedging premium. This is also something that we saw in 2011-2012, after waves of monetary easing.

This may continue until the summer, and investors buying at this point should be aware that breakevens are no longer historically cheap – and that the inflation risk premium could increase further.

Investors with a more bullish outlook are likely to view rising prices as a necessary part of the economy reopening but those with a bearish perspective may view this sentiment as a downside risk. In other words, it is expectations that are driving bond market valuations – and sentiment about future inflation is quite high, meaning perhaps that some investors are buying inflation-linked bonds when inflation itself is high, and not when the inflation hedge is cheap. If – or when – inflation moderates later this year as we expect, valuations may fall as investors could potentially feel they are overpaying for those hedges.

Higher inflation typically means higher long-term interest rates, which is not so good for the performance of long maturity inflation-linked bonds. For this reason, my own preference is for short maturity inflation-linked bonds, until the summer. Later this year it is likely I will increase duration as pricing pressures start to moderate as I foresee inflation in 2021 – much as it did in 2011 – returning to historically more normal levels.

This document is for informational purposes only and does not constitute investment research or financial analysis relating to transactions in financial instruments as per MIF Directive (2014/65/EU), nor does it constitute on the part of AXA Investment Managers or its affiliated companies an offer to buy or sell any investments, products or services, and should not be considered as solicitation or investment, legal or tax advice, a recommendation for an investment strategy or a personalized recommendation to buy or sell securities.

It has been established on the basis of data, projections, forecasts, anticipations and hypothesis which are subjective. Its analysis and conclusions are the expression of an opinion, based on available data at a specific date.
All information in this document is established on data made public by official providers of economic and market statistics. AXA Investment Managers disclaims any and all liability relating to a decision based on or for reliance on this document. All exhibits included in this document, unless stated otherwise, are as of the publication date of this document.
Furthermore, due to the subjective nature of these opinions and analysis, these data, projections, forecasts, anticipations, hypothesis, etc. are not necessary used or followed by AXA IM’s portfolio management teams or its affiliates, who may act based on their own opinions. Any reproduction of this information, in whole or in part is, unless otherwise authorised by AXA IM, prohibited.

| This article is based on information provided by AXA IM (Sponsored Content).

| All opinions expressed are those of the author.